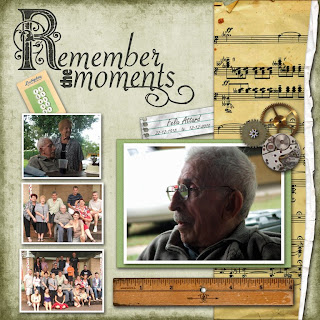 On December 12th, 2010 - ten days shy of his 92nd birthday my father - Felix Attard- passed away. Luckily I did get to see him before he died; Glynn, Lachlan and I flew to Sydney the week before when he was taken to hospital with pneumonia and we knew as we left his bedside on the Saturday that we were saying goodbye for good.
Who could complain after 92 years of living a full life? My dad had been through a war, immigrated to a new country, brought up a family of six children and achieved his dream of living on the Central coast of NSW in a house that he built. He was survived by 6 children, 19 grandchildren and 18 great-grand children.
Here is a layout that I created in memory of my dad - Felix Attard.
Posted by Grace at Wednesday, December 29, 2010

I am glad you have such great memories of your Dad Grace.

By hand: With heart